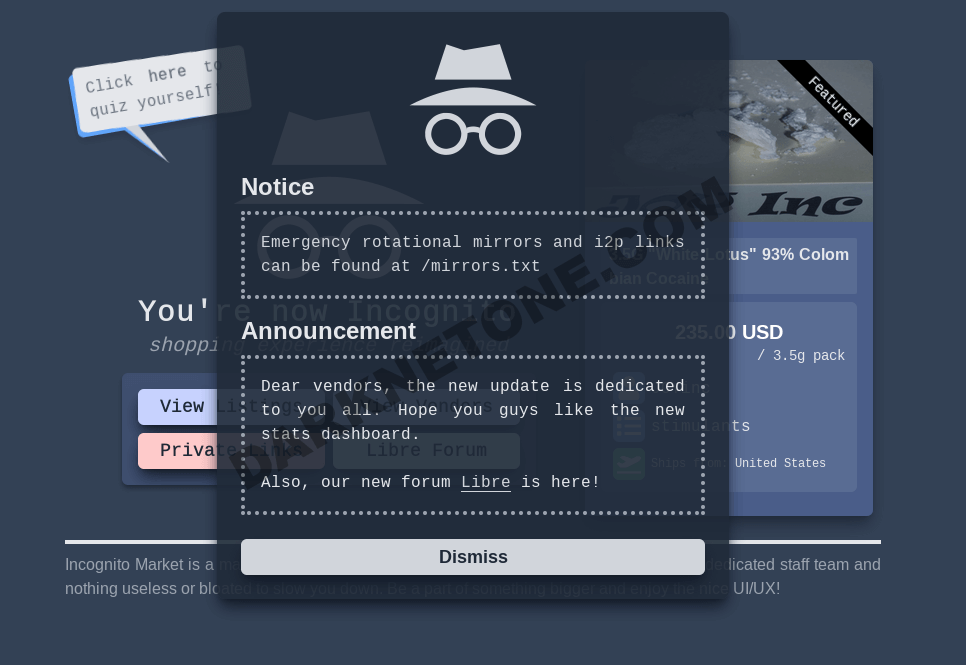 Seeking to fill a void during Dread’s extended downtime, the team behind the Incognito darknet marketplace successfully launched their own forum on a separate Tor URL, named Libre. The presence of the forum and its connection to Incognito was confirmed by the admin of dark.fail via tweet, on Jan 5.

Libre has been online since Dec 19 and has already managed to attract close to 750 members. It features a design that is vastly different from Dread, utilizing a dark theme and bare bones in terms of graphics. Per a forum user who identifies as part of the Incognito team in a post dated Dec 20, Libre was created to “provide an alternative for the community to discuss their ideas.” A URL for the forum can be found on Incognito market itself, which is up and running on Tor at present.

Libre currently features nine “communities,” with discussion of darknet markets and services offered by vendors being the most subscribed by members. One of the most popular posts on the forum thus far was written by Dread team member shakybeats, who shared a link to the ever-popular “DNM Bible” for market users who may have been experiencing recent difficulties accessing it due to persistent DDOS attacks across the Tor network.

Dread was taken completely offline by its admins on Nov 30th while its servers were reconfigured to mitigate the aforementioned DDOS attack. On Jan 2, a second update was posted to Dread’s System Status page, which currently replaces its usual homepage, with the following message:

“Happy new year! Don’t worry, we’re still here. The completion of our new infrastructure has been a bumpy process, but not long now until you can all return home. We will be back at full speed very soon.” – Dread admins

Canary messages on the System Status page were lasted dated on Jan 1 for HugBunter and Jan 2 for Paris. The duo is currently asking for XMR donations via Dread’s emergency subreddit to help cover upcoming server costs for the relaunch of the forum, which they expect to take place “roughly at the end of next week.”