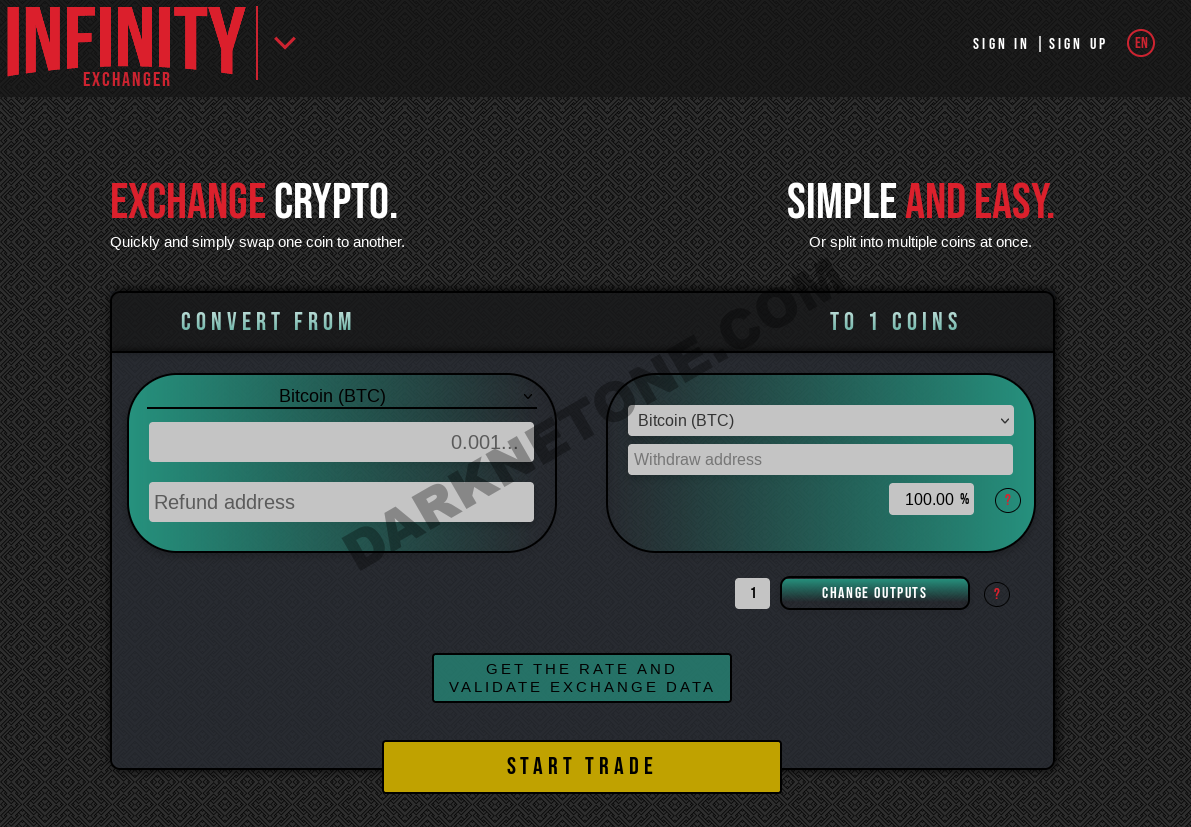 Infinity Exchanger is a Tor-based cryptocurrency exchange that allows for the easy and instant conversion of four coins: Bitcoin (BTC), Bitcoin Cash (BCH), Litecoin (LTC), and Monero (XMR). Users can also exchange one coin for multiple coins, deciding what percentage of the total deposit value they want to receive for each coin. In addition, Infinity Exchanger can be used as a coin mixer, with the user deciding how many outputs they want the withdrawal split into (including multiple outputs to other cryptocurrencies as well). No account creation is required to use the exchange.

The exchange system itself is quite straightforward and designed for ease of use. All that is required is a refund address (in case if for some reason an exchange does not go through) and a deposit address for newly-exchanged coins. The exchange process begins after the deposit transaction has received one confirmation from the coin network. Deposit addresses can be reused, allowing for the same type of exchange to take place with the same coin(s). Templates can also be created and saved, making it easy to perform similar swaps across multiple sessions.

Infinity Exchanger is part of the Infinity Project which consists of a small team of developers, admins, and designers. The main project itself is scheduled to launch in November 2022 and as of now the services it offers consist of just the exchange and a forum for related issues. Once launched, the project will be centered around a secure Jabber server that will allow buyers and sellers to communicate. The server will make use of a newly-designed traffic distribution system that the team says will “guarantee 100% uptime” for all parts of the project.

In addition to allowing coin swaps (between BTC, BCH, LTC, and XMR), users can split up the value of their deposit among multiple coins and addresses. For instance, it is possible to deposit BTC and receive 50% of the swap in LTC and the other 50% in XMR, or 30% in BCH, 30% in LTC, and 10% in XMR, etc. It is also possible to spread the amount received among multiple addresses for the same coin (ex. 3 LTC addresses and 2 XMR addresses). Finally, the exchange can be used as a coin mixer, meaning one BTC deposit can be split up between 6 different BTC addresses, all containing coins not linked to the deposit.

Infinity Exchanger charges a 3% fee across the board for all exchanges, plus an additional service fee to cover the cost of transaction fees. For each supported coin (BTC, BCH, LTC, XMR) there is a minimum deposit of $12 and a maximum deposit of $40,000.

In all, Infinity Exchanger provides a novel, Tor-only crypto exchange service that has proven to be relatively trustworthy in its short term of operation thus far. It combines swaps with a mixing service, although the site acknowledges that coins it receives may not always be regarded as “clean” by AML standards. This means users may want to consider performing their own taint analysis on coins received from the exchange. The Infinity Project seems to be geared toward expansion into hosting the sales of “goods,” and the exchange itself seems to be a way for it to establish credibility before launch.