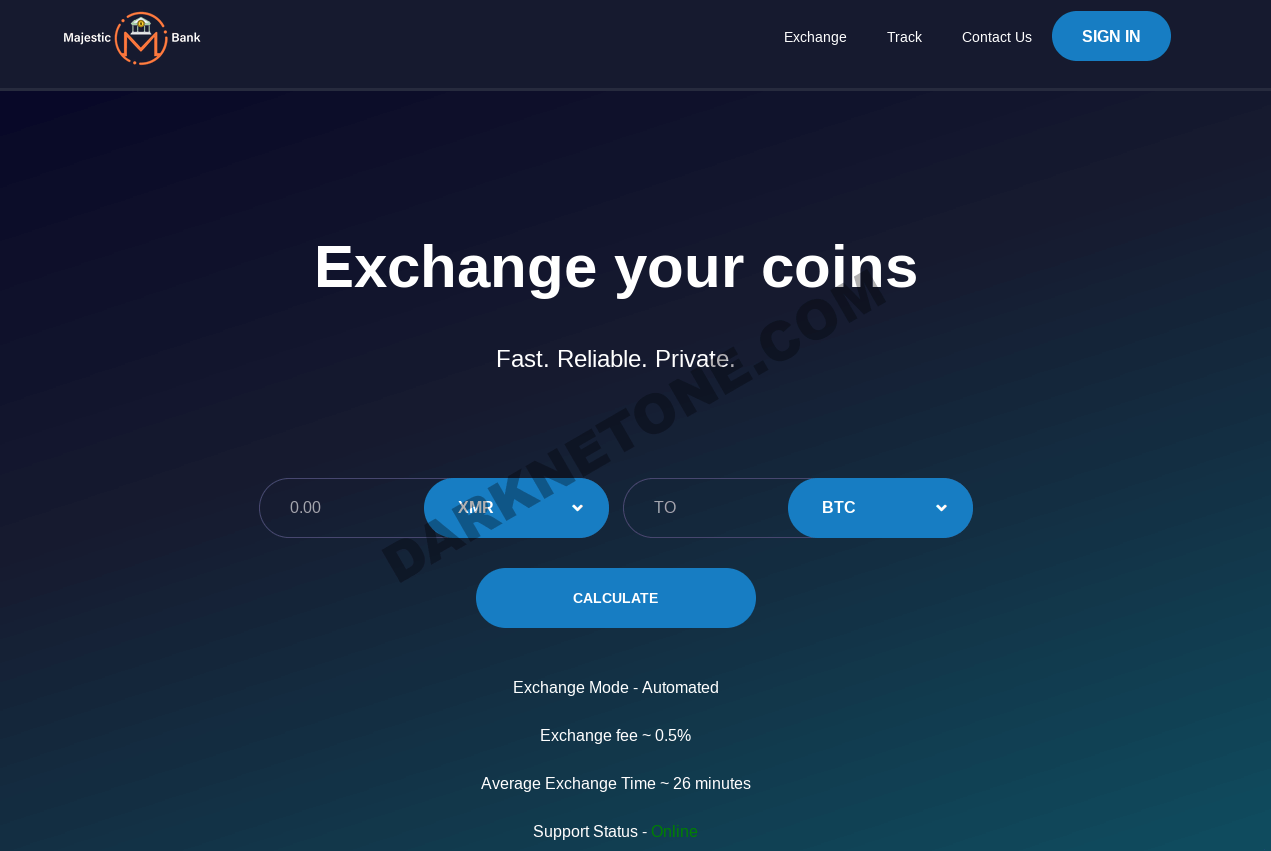 Majestic Bank is a coin swapping service that opened toward the end of 2021. It is available on both clearnet and darknet and supports swaps between Bitcoin (BTC), Monero, (XMR), Litecoin (LTC), and a fork of Monero named Wownero (WOW). For an average fee of 0.5%, users can swap between these four coins without having to create an account. Exchanges are initiated after a single confirmation on their respective blockchain and usually take between 15-30 minutes to complete.

Created with customer privacy in mind, Majestic Bank claims to not keep logs of user activity and to delete exchange data after two weeks, or more quickly if requested by the user. It also assures that data stored on its servers, however temporarily is “military-grade” encrypted. Options included during a swap include transaction speed priority, showing or hiding the transaction ID, and using SegWit when swapping BTC. Majestic Bank also boasts 24/7 customer service to assure users their coins won’t be lost.

Majestic Exchange bills itself as the “first CryptoBank focused on maximum privacy while providing crypto exchange and banking services.” The first references to Majestic Exchange to be found on the clear or dark web occur in late 2021, and it has managed to gain a number of positive references on the Dread darknet forum. They are generally seen as having a good reputation, committed to keeping their customers satisfied by running a smooth operation and being easy to contact.

Majestic Bank focuses on the execution of coin swaps between BTC, XMR, LTC, and WOW. Rates for the swaps are provided before the exchange is started and the user knows exactly how many coins they are getting after it starts. Swaps can be executed without having to create an account and once initiated can be tracked by an exchange-assigned ID. Provided on each swap screen is information regarding the current exchange mode (automated or manual), current average fee (usually ~0.5%), a system-updated average exchange time (currently 24 mins), and support status (currently online).

Majestic Bank advertises an average fee of around 0.5% for coin swaps, which puts it on the cheaper end of KYC-free exchangers. The FAQ states that fees may go as high as 2% for some exchanges and as low as 0%, depending on their current reserve supply of the coin being exchanged. There are no upper limits mentioned anywhere on the site, although they have a lower limit of $20 USD per swap.

In all, Majestic Bank is an easy-to-use swapping service that has managed to build a positive reputation in slightly over a year of operation. Their fees are significantly lower than many competitors, and the fact that they are available on both clear and dark web makes them widely accessible. Note that they do not service customers based in the US. Other than a limited amount of coins supported (currently four in all), there does not seem to be many downsides to Majestic Bank. It is, of course, good to keep in mind that they are a non-regulated, anonymous, trust-based entity, so it is recommended to limit swaps to amounts you can afford to lose.